A fanfare for the major triad:

It’s everywhere. Apart from being the principal building block of most music, its (sometimes) dulcet tones are used in shops, stations, airports and elsewhere to alert us to announcements of impending joy or (more frequently) gloom.

It has a sibling but, unlike the bright, stable major, minor is darker and more troubled; it doesn’t have the same close relationship with its immediate overtone family that major has. In fact, in terms of the ‘natural’ acoustic world, minor is an interloper and very much of an outsider… 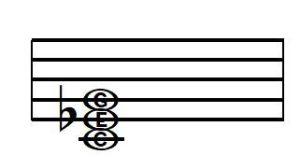 …though, it would be useful to distinguish good from bad news, for example:

“Your flight is departing on time and everyone has been upgraded to first class:”

“Due to the current rather inclement weather conditions, all flights have been grounded for the foreseeable future:”