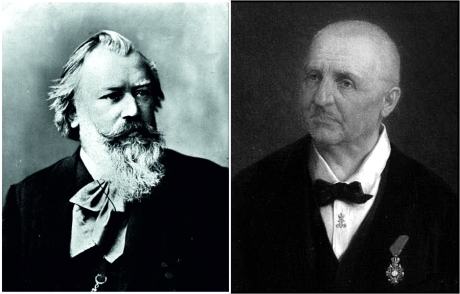 George Bernard Shaw – author, among a few other things, of The Perfect Wagnerite — was rather uncomplimentary about Brahms, describing him as ‘the leviathan maunderer’.

Eduard Hanslick – the eminent Viennese music critic and friend of Brahms – wrote of Bruckner’s Eighth Symphony that it was ‘interminable, disorganised, and violent’ adding ‘it is not impossible the future belongs to this nightmarish style, a future we therefore do not envy’. Brahms himself put it a bit more laconically: Bruckner’s symphonies, he declared, were ‘symphonic boa constrictors’.

These critical salvos are all part of a bigger war of words waged in Vienna and elsewhere between the ‘progressives’ of ‘The Music of the Future’ (mostly Wagner and Liszt) and the ‘reactionaries’ (Liszt called them ‘the posthumous party’) of Brahms and his supporters.

And, while Brahms seemingly respected the music of Wagner, half humorously describing himself as ‘the best of Wagnerians’, he gave no such quarter in his critique of his Wagnerian rival in Vienna — ‘Bruckner?’, he said, ‘that’s a swindle that will be forgotten a year or two after my death.’