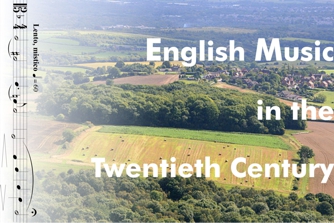 Received opinion is that the industrial revolution and its consequent urbanisation did much to destroy the traditional lifestyles of the English countryside. And, by the early twentieth century – the time any serious attention was paid – a whole raft of behaviours and cultures was in serious decline, verging even on extinction.

But the whole subject of the revival of interest in folk-music and other traditions such as morris dancing, is still a matter of some (fairly heated) debate and the seemingly implicit idea of some sort of pre-industrial, rural idyll has been under pretty sustained attack for a number of years.

Whatever the rights and wrongs of the folk music revival, it’s surely beyond doubt that the music itself was vitally important in the composition of much of the English art music we now associate with the 1900s. Vaughan Williams – our composer for this week – was, with Cecil Sharp, one of the main movers and shakers in the collection of these fragments of our heritage. Among his many folk-music influenced works the Five Variants on Dives and Lazarus attempts to reflect that experience as a collector; that in an oral/aural tradition, where the music and words were memorised and passed from singer to singer, ‘natural’ variants would occur: and who is to say which is the definitive version?