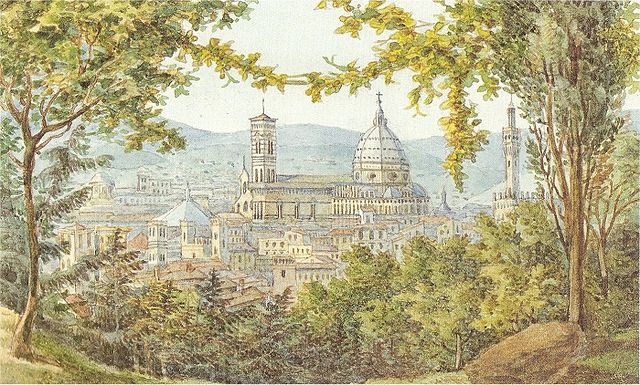 What did holidaymakers do in the halcyon days before the internet, Wi-Fi, smartphones and tablets?

They sent one another postcards, of course!

And before the postcard??

In the 18th/19th century affluent young gentlemen and (rarely) ladies were packed off to do the Grand Tour; sent traipsing around Europe in the fond hope that – rather like blotting paper – they would absorb enough culture to complete their education and give them a veneer of worldly sophistication. Mendelssohn was one such; and, in 1830, he found himself spending ten months in the birthplace of the Renaissance (very improving!). Unlike the rest of the jeunesse doré however, who for the greater part contented themselves with the occasional letter to mama, papa and the siblings (this was pre-postcard, remember), Mendelssohn not only sent home some rather impressive watercolours (an example above) but also managed to trump any perceived competition from fellow Grand Tourers by writing nothing less than an entire symphony based on his experience – beats ‘having a great time, weather splendid’ or ‘selfie of me with the Taj Mahal somewhere in the background’ any day!

For those of you who are still worrying at it, the three quotations mentioned in last week’s post were: