Sir Toby Belch: What is thy excellence in a galliard, knight?
Sir Andrew Aguecheek: Faith, I can cut a caper.
(Shakespeare: Twelfth Night) 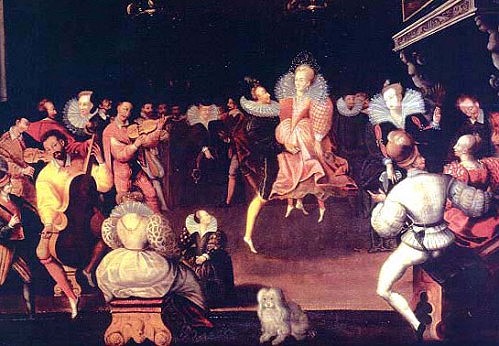 In this painting of Good Queen Bess ‘cutting a caper’ with her favourite favourite, the Earl of Leicester, it’s assumed that the couple are dancing the Lavolta, described by the Oxford English Dictionary as ‘a lively dance for two persons, consisting a good deal in high and active bounds’ (how else are we to explain away the queen’s apparently miraculous powers of levitation?)

Lavolta is a subspecies of the genus Galliard (‘a quick and lively dance in triple time’) and, as such, would have been frequently paired with a much more ‘grave and stately’ duple-time Pavane; My Ladye Nevells Booke contains ten examples of such Pavane/Galliard pairings.

Here’s an example of Lavolta  (with the female dancer, I’m afraid, not quite achieving the gravity defying feats of her royal counterpart):