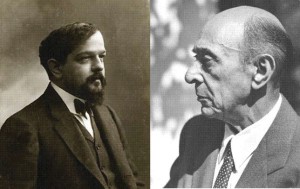 Two very good questions: the first is central to our understanding of western music and particularly of the way it ‘evolved’ during the 19th and 20th centuries. Not that easy to explain without loads of jargon: I’ll do my best!

As for the second: André Caplet is now best known as the orchestrator – at the composer’s instigation – of Debussy’s Children’s Corner and the famous Claire de lune from the Suite Bergamasque. He was, however, a fine composer in his own right. This week we’ll listen to La Masque de la Mort Rouge (The Masque of the Red Death, a fantastic tale after Edgar Allan Poe) and his Mass for 3 voices.

If you want to give feedback or leave a message click here.