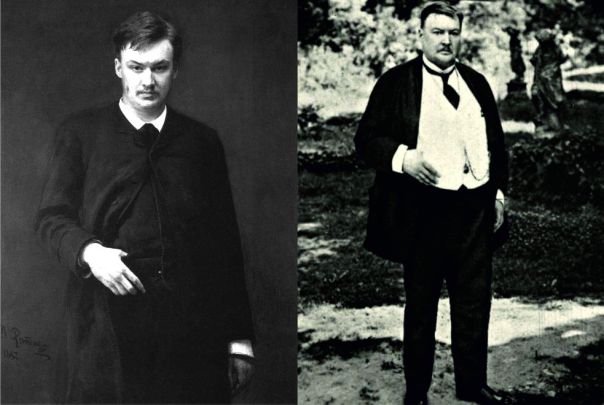 No-one can resist the ravages of time and, as you can tell, the difference between ages 22 and 65 was, in the case of Alexander Glazunov, of some significance. (The pose is interesting: is it an habitual stance or is the older man consciously imitating the famous Ilya Repin portrait of him that you see on the left?)

Unlike his sometime colleague, Lyadov, Glazunov was a hive of industry: as a composer – symphonies (8 of them), concertos, ballets and much else; as a conductor (though a rather mediocre one by all accounts) – engagements all over Europe and in the United States, and as a teacher – a tireless educator, administrator and promoter of his students’ music, he was appointed professor in the St. Petersburg Conservatory in 1899, becoming director of that institution during the turbulent years between 1905 and 1928 (hence, maybe, the marked difference between the two images above). He was a wunderkind, had an eidetic memory and, by all accounts, an unfortunate penchant for drink.

He was no mean composer: